We had a day of overall fun!
I again, had errands to do, but in between, Romeo got to have fun!

Okay, he might not have thought this was fun, but I have wanted to get his picture above downtown Flagstaff for awhile. I headed up the hill to Lowell Observatory (they discovered Pluto and are still fighting for it)
and right outside of their facility is an awesome lookout area.


After lunch, we headed to the dog park for Romeo's first visit. Wouldn't ya know, no one was there :(
While we waited, We walked over to the newly constructed mini Agility area.
I am thinking about training Romeo to compete in Agility. Since that's what I do anyway, and am putting my course together again, seems fitting.

He did great! A little unsure sometimes, but it was his first time being on an elevated surface like that so props to him!


After our fun at the dog park, ALONE (no one ever came) We headed to Walmart to get some baby supplies for Ava. He does so good being next to the cart, not phased at all by it.

After everything was done in the store, we then headed to the other dog park in town. I wanted Romeo to play with other dogs, since Ive noticed big dogs scare him a bit. There were many big dogs there, and as usual, he slowly approached them and was submissive towards them. He didn't play at all really.
I was going to call it a day, knowing what I need to work on, but just then a little Jack Russell mix came in.

He was the same age as Romeo, but smaller of course, and sure enough, Romeo took to him right away.
Apparently their dog is really shy, and refuses to play. They have been there almost everyday since they got him a month ago and nothing.

Wouldn't you know it, the dog and Romeo took to playing! The owners were so impressed! They kept taking pics, and saying they just couldn't believe it!

All in all, Romeo had a great day with lots of things to do and see, and lots of friends to play with :)

BTW - Godiva is a breeder candidate too and is a FBL. Cupid is a MBL. :)

Sarah and Romeo
Hi! My name is Sarah and I'm 25 and married to the love of my life. I raise pups for KSDS, Inc. and I currently have 3 dogs of my own,a Collie/Shepherd mix, Australian Shepherd and one Greyhound. I compete in Agility, Working on getting involved in Herding and looking into Lurecoursing. I have raised three assistance dogs and am currently raising Romeo. 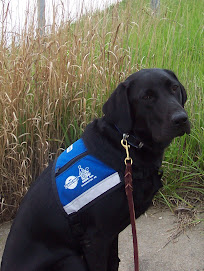 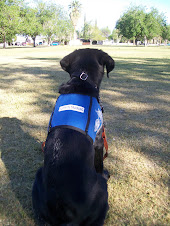